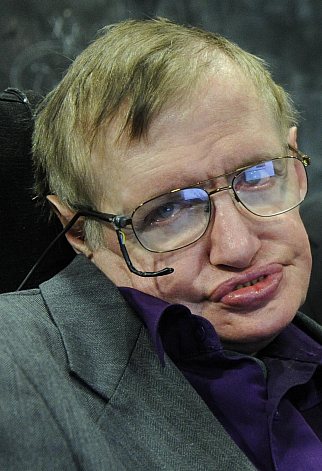 Stephen Hawking was at a young age of only 21 years when he was diagnosed with amyotrophic lateral sclerosis (ALS), a disease that was predicted to take his life in just two years. Recently, he had been focusing on a subject he held dear to his heart- Physics. However, after the tragic news, completing his doctorate was what some may reckon to be ‘undeniably improbable’.

Despite the devastating setback, Stephen paved his road to success through bravery, determination, perseverance, hard work and faith. Eventually, his efforts paid off and his hope did not end in vain, when he finally attained his long-awaited Ph.D. Notwithstanding Stephen’s victory and defiance of odds, his problems did not end there. The deadly disease continued to spread throughout Stephen’s body, weakening him and, in 1985, even robbing him of his ability to speak. Following the loss of his verbal communication ability, Cambridge created a speech-generating device which enabled him to substitute his voice with an electronic one.

Stephen Hawking proceeded to continue attending Cambridge following his successful graduation, and assisted in complex research. Stephen Hawking was even initiated into the Royal Society, an international fellowship of scientists, and deemed Lucasian Professor of Mathematics at Cambridge. Regardless of Stephen’s recent passing, his ‘Black Hole Theory’, one of his most famous hypotheses, remains incredibly helpful to cosmologists’ research and studies. Moreover, Stephen has written numerous great reads, one of which inspired the release of a film inspired from his life of ups and downs.

In my opinion, Stephen Hawking is an excellent inspiration for the disabled with bursting dreams, and I’m sure a vast majority would agree with me. Stephen Hawking is a motivation for the young and old. He has encouraged, and even proved how an ailment, no matter how severe or life-threatening, should never be the barrier between one and their ambitions. Despite Stephen’s recent passing, his legacy will continue to be the flame leading generations through darkness, empowering the public to believe in themselves and endure obstacles.